MANILA, Philippines – Former Duterte ally Pantaleon Alvarez was quick to share his blueprint for victory to the supporters of Vice President Leni Robredo: Reach out to their barangay captains, forge an alliance, and make their presidential bet win in May.

The Davao del Norte 1st District Congressman knows all-too well what makes a winning election strategy, having been instrumental in the come-from-behind victory of then-Davao City mayor Rodrigo Duterte in the 2016 polls.

Alvarez said key to Robredo’s triump in 2022 are the more than 42,000 barangay captains, “who know their communities by heart.”

The erstwhile Duterte ally asked Kakampinks to form relationships with their barangay captains, then strike a deal: Make Robredo win and they will help the local officials become victorious in the next barangay polls.

“If we want to win, and you happen to be unaware of who your barangay captain is, and don’t know where your barangay hall is located, it’s time to ask around and find out. Once you do, visit your local leaders immediately, talk to them, get their phone numbers, and keep the lines of communication open. Ask for their help and, in return, present the value proposition,” Alvarez said.

He called an alliance with these barangay captains a “hidden competitive advantage” that Robredo’s supporters should tap.


Before his falling out with the Dutertes, Alvarez was the secretary-general of the ruling Partido Demokratiko Pilipino-Lakas ng Bayan (PDP-Laban), which meant he had been at the forefront of sealing political alliances for Duterte then.

And for that he was rewarded the House speakership, with Alvarez acting as a devoted Duterte defender in the face of mounting criticism of the President’s abusive policies.

Alvarez once called Robredo “shameless” for criticizing Duterte’s bloody drug war, and he even mulled impeaching her as vice president in 2017.

Everything changed when Alvarez was ousted in 2018, with no less than presidential daughter and Davao City Mayor Sara Duterte leading the charge to unseat him.

This turned Alvarez into an opposition figure to the Dutertes. After licking his wounds, Alvarez focused on his home turf Davao del Norte, defeating the candidates the Dutertes fielded against him and his allies in the province in 2019.

But with Lacson still poorly performing in the surveys, Alvarez switched his allegiance to Robredo. He believes her campaign is now gaining ground, with tens of thousands of “Kakampinks” attending her rallies nationwide these past weeks. 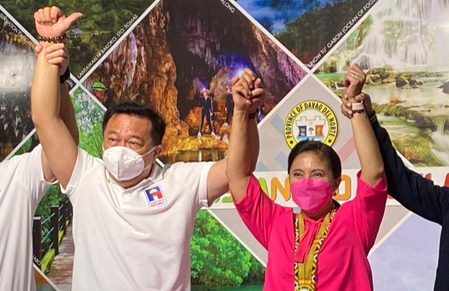 Alvarez even likened the current groundswell of support for Robredo to the Duterte campaign in 2016.

Alvarez said other presidential contenders can certainly copy his advise to “Kakampinks.” But he believes what sets them apart are the “drive and fighting spirit” of the Robredo volunteers, many of whom have been shelling out their own money just to help her win in May.

“I rarely see this kind of organic groundswell of support. It reminds me of President Rodrigo Duterte’s campaign. At that time, we faced historic odds against traditional machinery. What kept us afloat was the people’s support,” said Alvarez.

“Let us turn the challenges we face, and the massive odds we have overcome, into our finest hour,” he added.

Alvarez has already said sorry for his past attacks against Robredo, who in turn said he did not even need to apologize. They certainly make strange bedfellows, but Robredo needs Alvarez’s machinery if she wants to make a dent in Davao. – Rappler.com