MANILA, Philippines – Two years after the coronavirus pandemic shuttered the Philippines, most parts of the country have fully reopened, with the Duterte government pressed to usher in a “new normal” and jumpstart the road to recovery.

Vaccinations are in full swing, students have started returning to schools, while restaurants, cinemas, and stores have opened for business. Millions of Filipinos likewise appear ready to move beyond the pandemic.

A majority of Filipinos, 51%, expect the health crisis to end within 2022, a recent public survey from the Social Weather Stations (SWS) showed. The firm found optimism was likewise at a high with 45% of adult Filipinos optimism their life would improve in the next year.

But between then and now, over 57,000 Filipinos have died and more than 3.67 million more have gotten sick with COVID-19. Although scientists have uncovered a lot about the virus, researchers across the world continue to find out about the extent of the disease’s impact on our bodies. All the while, 57% of all Filipinos have gotten fully vaccinated.

Moving into its third year, the pandemic is still not over. Experts have also said it may be a while until the virus becomes endemic in the Philippines. Since 2020, however, COVID-19 has transformed millions of Filipino lives. Rappler reviews some of the major changes that have taken place locally, two years on.

The Philippines observed one of the world’s longest and strictest lockdown measures, with first enhanced community quarantine (ECQ) imposed on the island of Luzon on March 17, 2020. After struggling to implement strict social distancing measures in Metro Manila, over 57 million people in Luzon were ordered to stay home in a bid to curb the spread of the virus. Similar measures later spread throughout various areas in the country into 2021.

The measures exacted its toll on communities given little, or late, social support as many Filipinos feared death by hunger, if not COVID-19. Filipinos would see ECQ measures instituted a total of four times, each iteration implemented as the country faced a surge of cases, often driven by new variants. The near-standstill, along with varying degrees of quarantine restrictions, saw the Philippines lose P3.8 trillion by 2022.

Now, the Duterte government is keen on transitioning the country to a “new normal,” where establishments and public transportation are allowed to be fully operational, and no restrictions are in place on the movement of people from different age groups. Metro Manila and at least 38 other areas are at this stage.

After nearly two years of keeping its borders closed, the Philippines reopened to fully vaccinated international travelers in February 2022.

In two years, 57,625 Filipinos died from COVID-19. Data over the past years have seen severity vary based on age, underlying conditions, and vaccination status. But senior citizens have borne the highest risks: about 70% of deaths occurred among the elderly population. Tracking excess deaths during the pandemic, the Philippine Statistics Authority (PSA) recorded about 450,000 more deaths in 2021, compared to the same period five years before.

The official tally of COVID-19 cases in the Philippines is at about 3.67 million to date, though this is known to be an undercount. Only infections confirmed by RT-PCR testing were counted and reported by health officials. The recent use of self-administered tests also means many cases go uncounted.

But while health authorities have focused on case counts during the pandemic, the move toward an endemic scenario means that officials have started to place more emphasis on hospitalization. The latter is viewed as a more accurate measure of the virus’ impact on the health system, especially as Omicron cases have been less severe compared to Delta and more out-of-hospital treatment options have been available.

Despite masks coming off in many countries across the world, Philippine health officials have stressed the need to keep masks on at the moment. High vaccination rates still need to be achieved and nearly 3 million senior citizens have yet to get vaccinated. About 11.1 million children under 5 years old also can’t get protection from shots yet.

Masks will likely be the last health protocol to be lifted, the Department of Health said, adding, it hopes to be able to reach this point by the end of 2022. Despite this, experts say masks will likely still be needed in indoor settings and Areas where there are crowds or where there is poor ventilation, more so for the elderly and high-risk individuals.

“One rule of thumb is: if the setting is one where cigarette smoke would bother you, you would probably need a mask,” epidemiologist Dr. John Wong wrote in a Rappler explainer. Infectious disease specialist Dr. Rontgene Solante added that even if areas were to shift to Alert Level 0, masks should still stay on, especially if the Philippines’ vaccination rate is less than 90%. 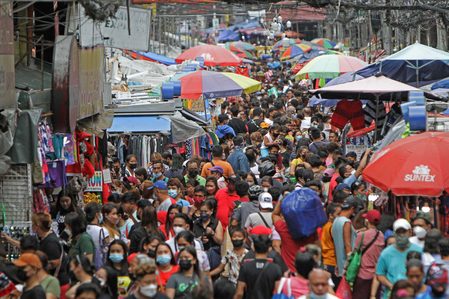 Vaccination remains one of the most effective strategies against COVID-19. Experts have pointed to the availability of shots as one of the most game-changing developments in the pandemic, with currently available shots being about 91% effective in preventing deaths.

A year into the Philippines’ vaccine drive, vaccine czar Carlito Galvez Jr. said vaccinations have reached an “inflection point.” It has now become more difficult to find and vaccinate individuals who have yet to receive a shot, health officials added. Officials have tried to address the issue by bringing vaccines closer to people in workplaces, homes, transportation hubs, and pharmacies. The moves seek to address a lack of access to shots – the key hurdle in vaccinations now.

To usher in more stability and safety, Wong said the Philippines needs to “create an immunity wall that is both high (highly effective against severe disease) and broad (inclusive of population coverage).”

“Whether by geography or by age groups, almost half of our immunity wall is still breachable by the virus,” he said. 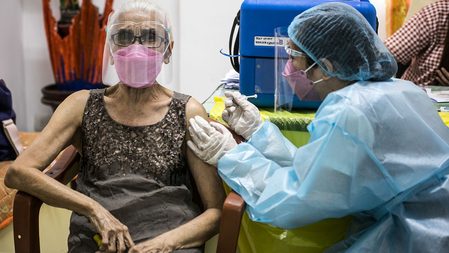 On November 15, 2021, the Philippines opened some 100 schools for limited face-to-face classes in a pilot run approved by the President, making it the last country in the world to reopen schools for in-person classes. Since then, more schools have been reopening.

As of March 10, there have been 6,122 schools that have begun face-to-face classes. However, the number is just a fraction of the country’s 60,000 public and private schools. The education department has expressed optimism that all schools in the country will eventually transition to limited face-to-face classes in the school year 2022-2023.

When the pandemic was declared in March 2020, schools were the first places closed to curb virus transmission. Since then, schools in the country have been using the distance learning system – which had been widely criticized as the country appeared unprepared for it.

Aside from the school system being unprepared for the shift, remote education also posed a major challenge for students who did not have anyone to facilitate learning at home, or whose parents were not capable of guiding them due to lack of knowledge. (READ: Parents bear the brunt of distance learning as classes shift online)

Lawmakers and advocates have expressed concerns about the quality of education students are receiving during the pandemic. (READ: Distance learning in the Philippines: A year of hits and misses)

The pandemic plunged the Philippine economy into its worst contraction since World War II, with gross domestic product (GDP) falling by 9.5% in 2020.

Due to restrictions, public transportation was also affected. In the early days of the pandemic, operations were limited to only essential trips, with reduced seating capacity.

In January, the government imposed a “no vaccination, no ride” policy in the metropolis in a bid to curb virus transmission while keeping the economy open. This, however, was met with criticism. Filipinos pointed out that some people remain partially vaccinated “for reasons outside their control,” like the slow vaccination pace. The policy was later on lifted in areas that were placed under Alert Level 2.

As more and more people turned to cycling, Metro Manila roads have been transformed to fit the “new normal” as shown by the presence of more bike lanes. The government also allotted P1.3 billion for the installation of a bike lane network in Metro Manila, Cebu, and Davao.

Experts have advocated for the integration of public and active transport. Under the strategy, Filipinos can bike to bus or train stations, ride to their intended stops, and bike once again to reach their destinations. Measures like allowing bikes on trains, providing bikes for rent, and pedestrianizing more streets could aid this effort.

As of March 9, a total of 2,359,803 OFWs have returned to the country. Of these, 1,012,681 were assisted by the government through repatriation programs, the national task force on coronavirus pandemic reported.

Data from the Bangko Sentral ng Pilipinas showed that annual remittances from OFWs rose steadily from 2016 to 2019 – from around $26 billion to $30 billion – but dipped to $29 billion during the pandemic. According to the Department of Labor and Employment, at least 760,138 OFWs have been aversely affected.

Unprecedented stress brought about isolation, fear of infection, death of loved ones, and inability to work and attend normal schooling conditions. These have increased the prevalence of anxiety and depression by 25% on a global scale.

Filipinos were not spared from the effects of the pandemic’s turbulence. Throughout the health crisis, the National Center for Mental Health reported record calls made to its hotlines during lockdowns. The top reason people reached out? Anxiety-related concerns.

It will take years to fully assess and absorb the effects of the pandemic on not only people’s physical health, but mental health as well, especially among young people and women who were among the hardest hit by the crisis. – Rappler.com