CAMARINES SUR, Philippines – Silence hung thick in the air inside the Naga Metropolitan Cathedral as parishioners came in droves, clinging to each other as partial, unofficial results indicated that the woman they had fought for in the past three months was not going to become the next Philippine president.

There was no sea of ​​pink inside the cathedral on Tuesday, May 10, though a handful still wore the shirts they bought for Vice President Leni Robredo’s failed bid for the presidency in the 2022 elections.

One woman brought with her a giant handmade pink rose, bearing the color that had symbolized Robredo’s promise to lead a clean and honest government – ​​if only Filipinos had allowed her to do so.

But over 30 million people did not, choosing to shepherd the Malacañang comeback of the dictator’s family by choosing his only son and namesake Ferdinand “Bongbong” Marcos Jr. as the 17th president of the nation.

Marcos Jr. has finally defeated Robredo, and the people of Naga flocked to the cathedral as they tried to make sense of the election day aftermath. They had kept their hopes up that 2022 would be the year a Bicolana would get to sit in Malacañang.

At 5:30 pm, heads turned to the side of the cathedral as Robredo finally entered, followed by her daughters Aika and Tricia, their family and close friends, and key people from her campaign team who flew to Naga after casting their vote. Jillian was left at home, as she was preparing for a school exam.

The parishioners’ applause echoed through the halls of the church, but they did not prolong it. The Mass, presided by no less than Archbishop Rolando Tirona, was about to begin. It was time to pray. They all needed it.

The mood was somber inside the cathedral as Tirona began his homily. Even the Archbishop could not stop himself from beginning his address with thinly veiled disappointment over the election results. “Ang sasabihin ko mula sa aking puso: Forever Leni, Leni forever,” said Tirona. (Let me say, from the bottom of my heart: Foreever Leni, Leni forever.)

He likened the day’s Gospel to the struggles of Robredo’s supporters over her electoral defeat. There’s a thorn in their hearts and an endless stream of what-ifs that weighed heavily on their backs.

But he echoed what Robredo herself said hours after seeing that Marcos Jr. was poised to win the presidency: The pain is unbearable indeed, but the fight doesn’t end here. It has to go on.

(Let us not have any regrets. We are being tested. We are being given more strength to say that the fight does not end here. In this fight, our weapon is our faith in the Lord.)

Robredo was no longer wearing the bright pink color that defined the massive volunteer movement that her candidacy inspired these past months. She instead wore blue, the color she initially wanted for her campaign, but she ditched the plan when saw that her supporters had decided pink to express their support for her.

The lone female presidential contender was supposed to speak after the Mass outside the cathedral, on a small stage set up for her by the Solid Leni Bicol volunteers. But a sacristan approached her and told her Tirona wanted her to speak at the altar, just beside the Archbishop’s seat of power inside the cathedral.

She was the presidential choice of many bishops, priests, deacons, nuns, and members of the clergy across the country, but it still was not enough to trump Marcos Jr. and the political elites who cast their lot with him.

Of acceptance and moving forward

When Robredo stood up from the church pew, she was met with a loud applause. They cheered “Leni! Leni! Leni!” – Similar to how her “kakapink” supporters chanted her name on the campaign trail.

She began by thanking Nagueños for standing by her all these months. She knew many of them shed tears and cried out in frustration after seeing the poll results, but she believed that they can all pull through.

This is not the first tragedy that the Robredos and Nagueños had to face and overcome. In 2012, when a plane crash took away the life of Leni’s late husband, longtime Naga City mayor and then-interior Secretary Jesse Robredo, Nagueños held on to the widowed Leni for strength. Robredo believes they can survive the aftermath of the 2022 elections, too.

Then the inevitable came, a reality check from Robredo herself: The majority of Filipinos have already spoken. The only thing her supporters can do now is to move forward and channel their grief to bring about a more meaningful change to the country.

(Perhaps my only wish now is that, while we are grieving, while some of us still can’t believe the election result – whatever the final results may be, accept it. Accept it, because this is where we are going to draw our collective strength.)

She said her team is already looking into the reported cases of alleged electoral fraud. They are studying what next steps can be done. But what’s more important now is for her supporters to keep the faith and to continue the fire they have started.

(There’s a bigger fight. Our fight does not end with these elections. Many eyes have been opened; many spirits were awakened. The fight goes on. This fight is not just a fight for the elections, but a fight for us to all be part of the good kind of governance in our country.) 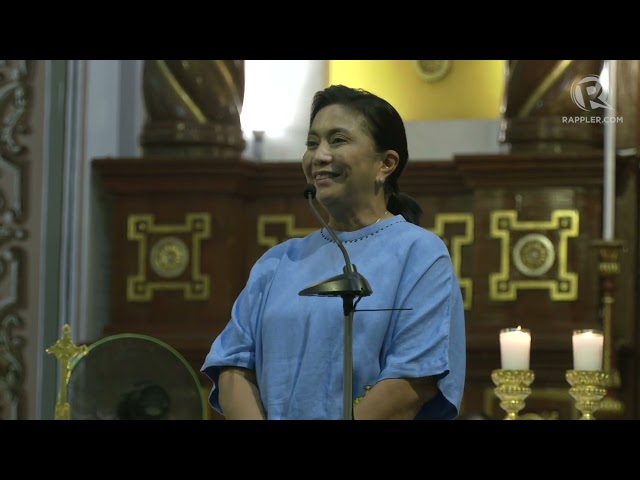 She finds one silver lining in her electoral defeat: Robredo can now spend more time in Naga City in Camarines Sur – her birthplace, her home, the place where she is loved by the people she has been serving all these years.

Robredo may have not won the 2022 presidential elections, but she had no regrets. She hoped the people who took a chance on her would feel the same way, too.