MANILA, Philippines – Presidential bet Manny Pacquiao said that the Marcos family should pay estate taxes due to the government as “no one is above the law.”

Speaking to reporters on Sunday, April 3, Pacquiao was asked about his “advice” to the Marcos family, since he was able to “fix” his tax issue with the Bureau of Internal Revenue (BIR).

Instead of focusing on his experience, Pacquiao said: Magbayad tayo. ‘Young honest lang. Kung may judgment na ng Supreme Court ‘yan eh, there’s no [one] above the law. Alalahanin natin, baka iniisip pa ‘nya – iniisip pa nila – they are above the law,” he told reporters before the presidential debate.

Pacquiao even said that this attitude of disregarding rules and regulations already extended to Marcos Jr.’s absence in government-sponsored debates.

(Even the invitation of the Comelec, they did not respect. This is because they think that they are the king and queen.)

In 2013, the BIR froze Pacquiao’s assets after it found that the boxing icon has tax deficiencies worth P2.26 billion, which ballooned to P3.3 billion including penalties. The Court of Tax Appeals later ordered the tax agency to stop collecting the money and went as far as saying there was no sufficient basis for the BIR investigation in the first place.

Pacquiao’s tax issue pales in comparison with the Marcos family.

The Supreme Court decision which ordered the Marcos family to pay P23 billion in estate tax became final in 1999 yet the debt remains unpaid 23 years later. The finality of the decision runs counter to Marcos, spokesman Vic Rodriguez’s statement that the issue is still “pending” with the court. 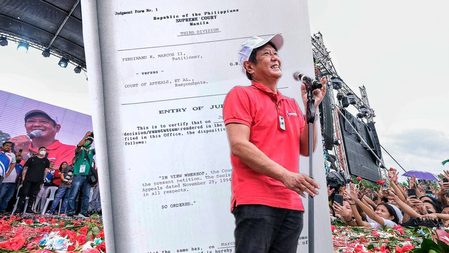 The total amount the Marcoses owe the government has now reached P203 billion – close to the P200-billion allocation that the Philippine government had spent to provide aid to the poor pandemic families at the height of the in 2020.

During debate proper, Pacquiao even issued veiled comments against the Marcoses without naming them, when the topic was about banning political dynasties. Pacquiao has been issuing strong statements against Marcos Jr. and his family in the past days, halfway through the campaign.

Is this a change in strategy? Pacquiao told reporters: “Nagsasalita ako nang kung ano ’yung alam ko at tama at hindi naman siguro ako gumagawa ng fabricated story.” (I’m only saying what I know and what is true and I don’t think I am fabricating stories.)

While in Iloilo, Pacquiao warned Filipinos should expect martial rule under a Marcos Jr. Presidency. This level of executive control would allow Marcos Jr. to erase his family’s debts to the government.

(Based on their words, based on their actions – that’s my analysis because I’m an athlete, I read the style of the opponent. If you want our situation to be like that, then vote for him. At the end of the day, my countrymen, we would be miserable.)