Manny Pacquiao was all but in top form during the second Commission on Elections (Comelec) presidential debates. He looked every bit pitiful, pathetic. He choked on issues that would otherwise have been easy to address had the situation been normal.

But nothing about Pacquiao’s candidacy is normal.

First of all, he’s an avowed “Christian,” called upon to live a life as close to biblical tenets as possible. All across several debates, he made sure the public was aware of the “doctrines” he espouses, mistaken though he may be at times. Second, he’s a contender for the presidency, a rat race that, in more “worldly” terms, would require a Machiavellian posture if he expects to survive its rigorous twists and turns.

Problem is, Jesus Christ’s gospels and Niccolò Machiavelli’s The Prince have nothing in common. They’re the perfect example of flip sides – oil and water, heaven and hell, night and day. To even think of subjecting the Bible to contortions and spasms if only to justify an inhuman approach to governance is to risk a collision course with insanity, and that’s not even the half of it.

You know what they say about the man whom the gods choose to destroy.

Power corrupts, and absolute power corrupts absolutely. If the Good Book were to be the blueprint of what power can do to the best of human beings, then consider King David – called the “man after God’s own heart” – and how power brought him low by having the husband-soldier of the woman he planned on coveting killed in the frontlines. Pacquiao is no King David.

(That is why, if I become president, the war on drugs will continue. But I will not kill all the users. Those I will kill – and this I will do publicly – are those who smuggle drugs into the country.)

After all the squinchings he had to do so as not to reflect Duterte’s Kill, Kill, Kill – saying he would dispense with extrajudicial killings and punish officers breaking the law – he capped his lines, saying, in Tagalog: “But if I will become president, I will protect my army, our police forces, our soldiers because their job is the security of the country. Let’s not…let’s balance it.”

Pacquiao may have softened on death penalty issue, but still wants to execute drug importers 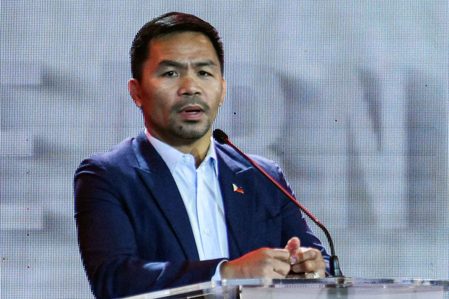 His ambivalence was alarming, his words chilling. It was almost as if you were staring at a man much too unhinged as to make sense of his position in the scheme of things, disoriented in a maze of tormenting riddles, mysteries, paradoxes. While Pacquiao may have reason to believe that the Scriptures allow him, as president, to inflict the most brutal and final of all punishments – death – the same Bible and our Constitution do not consent to injustice.

Which brings me to the point I am trying to make. If the Rodrigo Duterte regime failed in its campaign to curb the illegal drug menace after killing 30,000 suspected users, how can Pacquiao be any better by continuing a highly flawed and unsuccessful campaign? And for what reasons, may I add?

The disorientation is beginning to show. Must we now deal with a president shackled by political neurosis on one side and a guilty conscience on the other? See, the one reason why Duterte did not end up as a total basket case is that it is widely assumed that he doesn’t have a conscience to begin with. I am, of course, assuming that Pacquiao has one, one too brittle to survive the challenge.

The other concern is the current state of our justice system – ripped to shreds by corruption, impunity, and a callous disregard for law. Why would a Christian throw his support for a deadly campaign when even the rest of his six years in office would not be enough to exhume the corruption that is entrenched in the system? This same corruption has spawned the killings.

The presumption that all will fall in line once Pacquiao sits as chief executive is as dangerous a premise as his own failure to understand the mechanics of conspiratorial crimes.

It’s no secret that the illegal drugs trade – its manufacture, distribution, and sale – thrives on the collusion of powerful people and the corruption that bonds them together. Weren’t we all “caught unawares” after Davao Death Squad insider Arturo Lascañas divulged Duterte’s friendship with Michael Yang? It’s an open secret that is more open than secret. But then the question: can Pacquiao say no to any offer of money from drug lords in exchange for the “safe” manufacture and trafficking of the illegal substance? Are you of the opinion that being rich is sufficient reason not to remain corrupt? Aren’t those accused of plunder already wealthy to begin with?

If you ask me, Pacquiao would do well to keep to his Christian faith than run for president. As president, he might do more harm than good – to himself and others. Philippine politics is a wormhole of indignities in which no one who professes to be a follower of Christ could live to tell the tale.

His support for the war on drugs is already a sign that what had started off as a simple attempt for national security and human rights to “meet halfway” would soon turn to another deadly game of Kill, Kill, Kill. Human rights always take the fall.

His posturing, and to think he hasn’t won the presidency yet, is drawing dangerously closer to tyrant disciple. Thus, Pacquiao should be ashamed of backing Duterte’s bloody drug war. His wealth will not be enough to atone for even just one of the tens of thousands of lives wasted, coming mostly from the poorest of the poor of which he was once a part.

For whatever it’s worth, the coming Holy Week is the best time to reflect on this. – Rappler.com

Joel Pablo Salud is the author of several books of political nonfiction. He currently saddles his pen as senior desk editor of Rappler.