Could the Picasso currently in Imelda’s home also be a fake? That would not be unusual for Imelda, says former PCGG commissioner Ruben Carranza.

MANILA, Philippines – In new photographs released by the Marcos family showing president-in-waiting Ferdinand “Bongbong” Marcos Jr. visiting his mother former first lady Imelda Marcos, they flaunt paintings including a Picasso that was supposedly already seized by the government in 2014.

“Personally I know that what we seized was a fake, it was a tarpaulin so it’s still with them,” former Presidential Commission on Good Government (PCGG) chairperson Andres Bautista told Rappler in a phone interview Friday, May 13.

The PCGG under Bautista, reinforced by government operatives and court sheriffs, raided the Marcoses’ houses and offices in 2014. Of all the raids, only the raid of the Marcoses’ San Juan home on September 30, 2014, was successful, according to court records shared with Rappler by veteran court journalist Peter Tabingo of Malaya Business Insight.

In the return of the writ, 15 paintings were listed to have been seized in San Juan, including the “Picasso Replica Brass Strokes (Reclining Women VI/Femme Couchee VI by Pablo Picasso,” or what looks like the painting recently photographed in Imelda’s home .

The raids were prompted by the decision of the anti-graft court Sandiganbayan in Civil Case No. 0141, forfeiting in favor of the government jewelries and paintings declared to have been stolen wealth of the Marcoses.

The September 2014 raids weren’t all successful because teams were either turned away in condominiums, the House Speaker could not give clearance to confiscate paintings in Imelda’s office at the House of Representatives, or operatives found only empty frames in Batac, Ilocos Norte.

The original custodian of the 15 paintings, including the Picasso piece, from the San Juan home was the Bangko Sentral ng Pilipinas (BSP). However, the BSP immediately wanted to be relieved of custodian duty,

“Note that the BSP does not vouch for the authenticity and genuineness of the 15 paintings or the other paintings covered by the writ of attachment,” said the BSP’s manifestation on October 21, 2014.

“That’s the BSP saying the paintings are not real,” said Bautista in Filipino, “at baka sila ang sumabit pa (and they were wary they’d get into trouble for it).”

According to the PCGG’s 2014 annual report, after the BSP was relieved of custodian duty, “the transfer to the National Museum was effected on February 11, 2015.”

Rappler was still asking the National Museum (NM) if they have the painting in their inventory. Rappler has also asked the PCGG for comment. We will update this once NM and the PCGG respond.

“Ang alam ko ay nasa kanila ang totoo (What I know is they have the authentic one),” said Bautista.

Marcos Jr.’s spokesperson Vic Rodriguez and his former campaign manager Benhur Abalos have not yet responded to our inquiry.

Former PCGG commissioner Ruben Carranza said it’s also possible that even the one hanging in Imelda’s house and photographed recently is also a fake.

“So maybe these are two different replicas, which is not unusual for Imelda,” said Carranza.

The New York Times reported in 1986 that much of the art that Imelda bought were “said to be bogus.”

“I was told sometime ago that she also had glue-based fakes of jewelry made. She lent fake paintings to a Manila museum during the dictatorship, pretending they were originals and expensive. It is possible that if there are authenticated originals they would be elsewhere,” said Carranza.

If the PCGG knew back then that what they seized was fake, and therefore cannot sell it to derive profits, why has no one acted all this time?

If the current PCGG wants to look into it, Bautista said it can.

“They can if they want,” said Bautista.

The PCGG has already recovered P174 billion in stolen wealth from the Marcoses and their cronies, and is running after P125 billion more.

Marcos Jr.’s plans for the PCGG has been unclear, once saying in an interview he wants to expand its mandate when the PCGG was established exclusively to go after Marcos loot. Stolen wealth of other officials is handled by the Office of the Ombudsman. 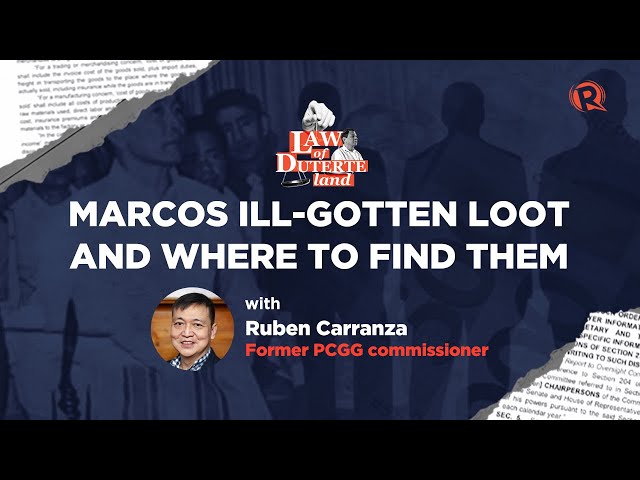