Jurgen Klopp saw his Liverpool side win at Arsenal to record a ninth consecutive Premier League victory and close to within a point of leaders Manchester City – but admits any sort of momentum can be lost in an instant.

Second-half goals from Diogo Jota and Roberto Firmino were enough to secure a 2-0 win at the Emirates Stadium as Liverpool took full advantage of City’s goalless draw away to Crystal Palace 48 hours earlier.

Just a single point separates the title protagonists, who meet at the Etihad Stadium on April 10 in a fixture that will go a long way to deciding who lifts the trophy at the end of another enthralling race.

While Liverpool are now the division’s in-form team, Klopp is thinking about putting too much faith in momentum leading the charge to a second championship in three years.

“Momentum is the most fragile flower on the planet,” he said.

“If someone walks on it, then you have to work to get the momentum back and just get through it.

“A rhythm is good but a rhythm is playing every four days, three days, it is a rhythm but it is an intense one, we are not complaining, we want to be in all competitions. It is fine but the opponents are all quality and they are really different.

“We constantly travel, we go here, we go there. I don’t complain, we don’t complain, it is just how it us. You wake up in a different hotel and someone tells you where the restaurant is and you try and remember the number of your room.”

While Klopp would not complain about the amount of fixtures Liverpool face as they compete for the Premier League, Champions League and FA Cup, having already won the Carabao Cup, Arsenal boss Mikel Arteta was less happy.

The Gunners must now look to bounce back from a setback to their own recent good form which has seen them become favorites for a top-four finish.

They travel to face Aston Villa in Saturday’s early kick-off, a sequence which is repeated next month when they face Chelsea on Wednesday, April 20 and host Manchester United at 12:30 just three days later.

“And they’ve done it again when we have to play Chelsea and Manchester United. So if they want to give them any advantage, I say to them today: ‘Thank you so much for doing that’.

“Don’t worry the players on Saturday they will be there, with energy. They will eat, sleep well, but thank you so much to the Premier League for putting the fixtures like this. Very, very helpful. 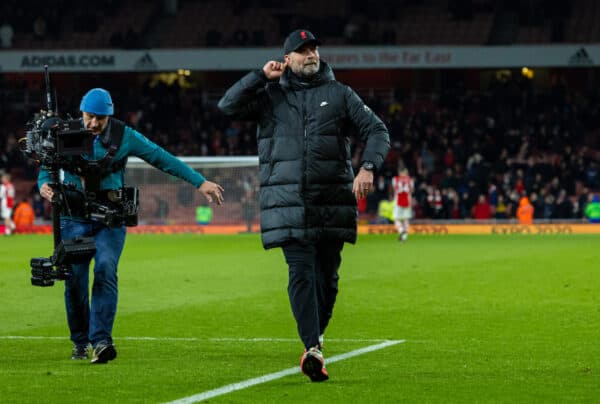 The Gunners will be aiming to regain the sort of form which has seen them compete for a return to the Champions League, but for Liverpool Klopp is keen to not put any focus on City ahead of their showdown meeting.

“I really don’t think a lot about City, that is the truth,” he added.

“I don’t think it is a problem for a human being every three days to be focused on what you do, but then comes in the physical part. We don’t fight City, we play City in three or four weeks and we will give them a proper fight then but apart from that we are in a good moment, in a good mood but we know the only way we can do it is to dig really deep.”