Liverpool’s commanding 2-0 win at Brighton was lauded by those watching on from the media, as Luis Diaz again made the headlines.

The Reds faced a potential banana skin at the Amex Stadium on Saturday lunchtime, in what was another key game in the Premier League title race.

After a slow start, Jurgen Klopp’s team eased past their opponents, with Diaz giving the visitors a half-time lead with a brave header.

Mohamed Salah made it 2-0 from the penalty spot after the break as Liverpool saw out the rest of the match with relative ease.

Here’s a look at how the media reacted to the Reds’ latest triumph.

Diaz was the standout player for Liverpool…

Goal’s Neil Jones was one of many in awe of the Colombian’s performance:

“Before this game, Jurgen Klopp was asked to sum up the impact Luis Diaz has made since his move to Liverpool.

“’Good, great, outstanding,’ were the words he chose, and having watched this then who could disagree?

“You don’t get many £50 million bargains, but the Colombian looks to be exactly that, a signing so tailor-made for the Reds that he may as well have turned up singing ‘You’ll Never Walk Alone’ and referring to his teammates as ‘la’ or ‘kidda’.

“He was too good for Brighton here, his first Premier League goal setting Liverpool on their way to a 2-0 win which keeps them firmly on the tail of Manchester City at the top of the table.”

“Credit to the Reds’ recruitment team once more. They’ve found the right man at the right time for the right price.”

Freddie Keighley if the Mirror was similarly impressed:

“The Colombian had shown plenty of potential since his £50million January transfer from Porto yet he arrived on the south coast with only one goal in nine Liverpool appearances to his name.

“But there was a sense the goals would soon come for a player who looks deadly on the ball with his dribbling and eye for a chance.

“Sure enough, Diaz latched on to Joel Matip’s sumptuous clipped ball which scythed through the Brighton backline, nodding past Robert Sanchez to give Liverpool the lead on 19 minutes.” 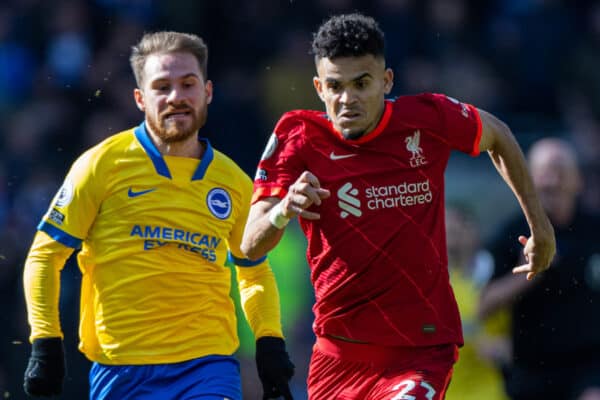 Sam Dalingof the Guardianfocused on the manner in which Diaz has adjusted to life in England:

“Luis Diaz once again showed why, should the worst happen, life can go on.

“The speed of his adjustment to the Premier League has been remarkable; to say he has hit the ground running would be like describing Usain Bolt as a jogger.

“On his first league appearance away from Anfield, Díaz flicked, kicked, twisted and spun to the ground. Each time he got up, including after he nodded Liverpool ahead by bravely beating Robert Sanchez to the ball.”

Luis Diaz’s impact could turn this season into a special one for @LFC the club only signed him in January because Spurs made an offer, thanks Daniel! #BHALIV

And, writing for the National News, Richard Jolly was another who hailed Diaz:

“The joy and the pain came together for Luis Diaz. Bruised but brilliant, he ensured Brighton were beaten. For Liverpool, it was comfortable progress. An eighth straight win halved their deficit to Manchester City to three points. The title race remains very much on.

“A January signing has given Jurgen Klopp’s side added impetus and even on the day when Mohamed Salah reached 20 goals in a Premier League season for a fourth time, in turn taking Liverpool to 2,000 in the competition, the Colombian was their courageous catalyst.

“Robert Sanchez smashed into Diaz as he scored his second Liverpool goal. Once he had picked himself off the turf, he resumed his work of tormenting Brighton. His combination of pace, directness and ferocious work ethic underlined the sense he is a natural fit for Klopp’s brand of football.”

A richly deserved win was hailed by some… 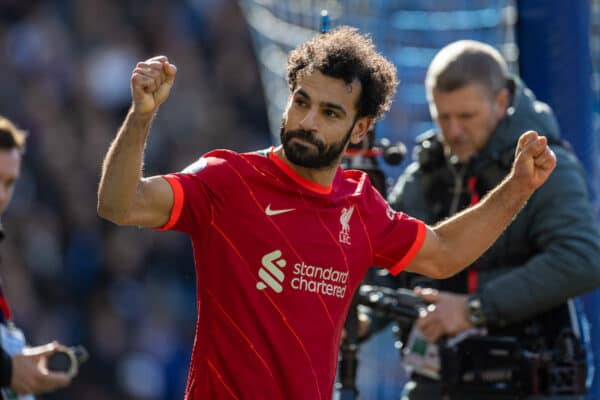 The Telegraph‘s Jim White praised the “routine” nature of the victory:

“As wins go, this could not have been more routine for Liverpool. Brighton, a side whose role seems to be giving top four managers the opportunity to make patronising remarks even as they bank three points, duly allowed them to close the gap on Manchester City at the top of the table.

“Acting as the perfect hosts, Brighton tested their visitors with just the one shot on target all game.

“Goals are a different matter for Jurgen Klopp’s side, however. And, as they scored a goal in each half, Liverpool crossed a couple of notable statistical landmarks.

“Their second strike, for instance, was the club’s 2,000th Premier League goal. And, in scoring it, Mo Salah, notched up his twentieth league goal for the fourth season in a row for Liverpool.”

While Karl Matchett of the Independent was impressed with Joel Matip’s impact on the result:

“When coming up with a list of the more in-form final-third productivity merchants in the Premier League, Joel Matip probably isn’t the name who usually springs to mind.

“Maybe that’s overstating it somewhat, but the newest Player of the Month has scored one and assisted twice now in his last five matches and it was he who found the time and clarity in his delivery to help Liverpool open the scoring at Brighton, en route to a 2-0 win.

“It ended what had been a rather chaotic opening from the visitors, and it was a largely different game thereafter.” 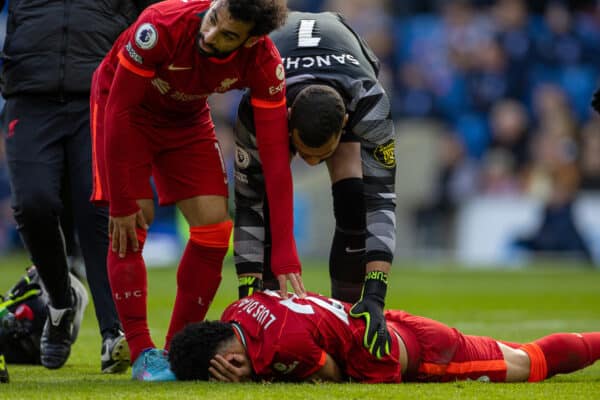 This Is Anfield‘s Mark Delgado couldn’t fathom how there was no sending-off:

“Brighton fans spent most of the second half complaining that the most marginalized decisions went against them, most of which were actually right to be Reds free-kicks.

“But they seemed curiously oblivious to the most ridiculous officiating call of all going their way – no red card issued to Robert Sanchez.

“Exactly how the goalkeeper was attempting to intercept the ball even if he hadn’t been three weeks slower than Diaz is anybody’s guess, but all his outstretched arms and legs managed to do was nearly chop the Colombian into multiple pieces.

“It was a straight red. It was obviously a red. It’s actually totally understandable that the ref doesn’t see it, being at such speed and a collision from different directions, but this is completely what VAR is there for.

“Another object failure of the system and the personnel.”

Carragher was left perplexed by an incomprehensible decision:

I’m convinced the red card wasn’t given because it was a goal. That header goes past the post & it’s a red card. It’s almost like, a goal is enough. #BHALIV

Finally, Jones echoed the thought with not even a yellow card being brandished:

The Spaniard was both high and reckless with his challenge, and it was a mystery, to say the least, that Mike Dean, the referee, was not advised by Stuart Attwell, the VAR, to have another look at the incident. Sanchez was not even booked as it turned out.