Some Robredo supporters find it suspicious that her votes had consistently been at around 47% of Ferdinand Marcos Jr.’s when election returns were being transmitted

MANILA, Philippines – The Commission on Elections (Comelec) on Tuesday, May 10, brushed aside claims circulating online that the automated election system (AES) was rigged in favor of the presumptive winner of the presidential race, dictator’s son Ferdinand Marcos Jr.

“Our system went through certification, we had a local source code review. How can you insert such a percentage to hand a win or loss to a candidate?” Comelec Commissioner Marlon Casquejo said in Filipino during a press briefing.

Some supporters of Marcos Jr.’s rival, Vice President Leni Robredo, raised the claims after spotting a trend they found suspicious: Robredo’s votes had consistently accounted for 47% of the former senator’s, once clustered precincts began transmitting election returns to Comelec servers past 7 pm on Monday.

But Casquejo said the transmissions from the vote-counting machines (VCMs) were from clustered precincts in different locations.

“In our transparency server, tumatanggap siya ng resulta coming from different clustered precincts, wala iyong tinatawag na balwarte. In the first transmission, iba-ibang lugar ito,” he explained. “Lahat ng clustered precincts in different locations, nagtatransmit papuntang transparency server. If you receive that result, and there will be a percentage lead, most, ganoon na rinang lead when it likely comes to all transmissions.”

As of past 2 pm on Tuesday, 98% of election returns have been transmitted, the fastest since 2010, according to the Comelec.

“It’s because of the improved and upgraded equipment and systems so as to prevent the 2019 scenario,” Comelec Commissioner George Garcia said on Viber, referring to the infamous seven-hour glitch of 2019, when the transparency server “choked” and failed to reflect election results for multiple hours.

“It’s because of the improved and upgraded equipment and systems so as to prevent the 2019 scenario,” says Commissioner Garcia, referring to the infamous seven-hour glitch.

Photo below, from Commissioner Casquejo, compares speed of transmission results since 2010. pic.twitter.com/J1926lOYPv

Comelec Spokesman Rex Laudiangco refuted insinuations that the speedy transmission was proof of election cheating supposedly because many cities and municipalities had yet to proclaim election winners.

“The general average in the board of canvassers is that 99.138% have received [election returns],” he said. “[Clustered precincts] that encountered issues account for a mere, scattered 0.8%, and are isolated [incidents].”

The process goes like this: once voting closes, VCMs transmit vote counts or election returns to three destinations: the local board of canvassers, the transparency server for election monitors, and the Comelec’s central server. (READ: How does the PH automated election system work?)

But the Comelec also automatically publishes on its website the precinct-level election results transmitted to its central server – this is where the 98% ERs already transmitted reflected on the Comelec’s website comes from – but these results are unofficial and not tabulated.

The Comelec said it believes an upcoming random manual audit (RMA) will help clear the air around the election results.

The RMA, a process where independent auditor manually tally votes and compare the results with machine tallies, is slated to begin on Wednesday, May 11.

A total of 757 clustered precincts randomly chosen will be part of the 45-day RMA. 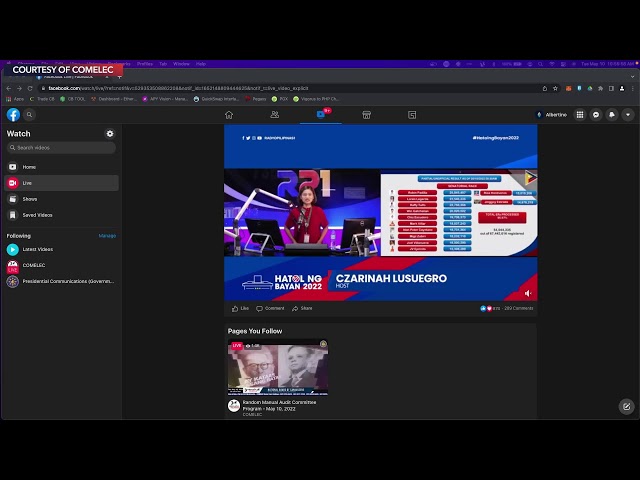 “We know there are still doubts, and we are here to prove and erase those doubts,” said Commissioner Aimee Ferolino heads the Comelec’s committee on the RMA. “We won’t side with anyone. We will just look at the records and let the record speak for itself.”

In 2016 and 2019 elections, the RMAs had accurate rates of 99% for the selected vote-counting machines. – Rappler.com