They huffed and they puffed, but they actually created nothing. Then Liverpool awoke from their slumber to make it nine league wins in a row and close to within a point of Man City.

Really good positional play to be nice and on the front foot in the first half, which was just as well as he was called upon to clear several through balls behind the defence.

Unbelievable work to close down Lacazette and then save from Odegaard soon after the restart. Given the Reds scored soon after, the importance of that save was only heightened.

Involved in most play in both directions: Martinelli was the Gunners’ most regular outlet, so Trent had a tricky time defending at times, but he was also our usual direction of play.

One gorgeous cross had nobody attacking it; another brilliant through-ball just before the break almost saw Mane score.

Stopping Martinelli proved mostly beyond Trent though (and Hendo, and Matip) far too often.

Had plenty to do in the first half in terms of tracking runners, making clearances and trying to play out, particularly as the defense wasn’t well-protected in that 45′.

Had a lot more defensive ‘actions’ to do than his central partner as the Gunners attacked that channel wherever possible.

Two big clearances and blocks soon after 2-0 to further halt any attempts at a comeback. Give him back-to-back Player of the Month awards!

Did very well covering runs in behind from Saka when Arsenal went direct and made a whole bunch of passes across his own back line without the Reds actually going anywhere with the ball.

Not his greatest showing, but didn’t do anything wrong.

A very important clearance from inside his own six-yard box after another dangerous move down Arsenal’s left in the first half, then repeated the trick in the second.

Defended his flank brilliantly and got forward to vital effect in the second half, setting up our second goal and linking old school style with Mane down that wing.

Unquestionably the most important of Liverpool’s midfield contingent in the first half, largely as we did nothing in possession and he had to make a few big challenges on the edge of our box.

All that work paid off as he had a nicer time of things after the break and the Reds still had the draw to build from rather than chasing the game. 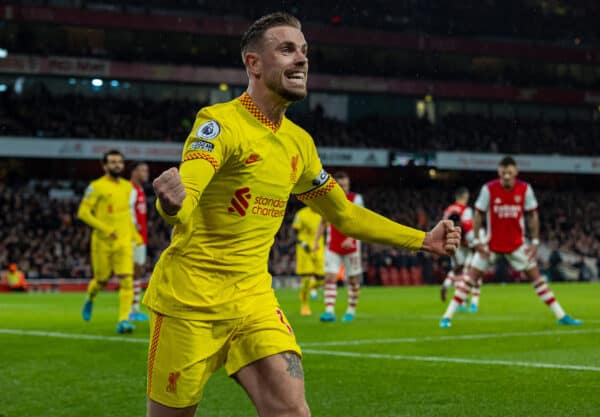 The captain has been in better form of late but went totally missing in the first half. One or two neat passes early on but was so regularly bypassed by the home team’s attacking play. Really needed to do a lot more to help Trent in particular with Martinelli.

Took until well after the hour mark for him to drop inside of the right-back and goalside of the ball to stop Martinelli simply ducking infield.

Really poor on the ball.

A rare 45 minutes for the Spaniard as he saw plenty of the ball but was totally unadventurous with it.

Abysmal back-pass should have cost a goal, but for Ali’s superb save from Odegaard.

Just didn’t happen for him often enough this time, but like Jota he had one vital moment which went perfectly – he claimed a perfect assist for the opener.

Reprised his original Liverpool role down the right flank with Salah sub, but didn’t really manage to get at Tierney as much as might be expected. In fact, between falling over the ball and overrunning it, he made just four passes in the entire first half.

Switched left and fared not much better, though did have a chance right either side of the break. A great first touch before half-time, but he was under pressure to sky the effort – then was offside when scoring after the restart.

In open play it was more of the same for the remainder: not heavily involved, too quick to lose possession when he was. 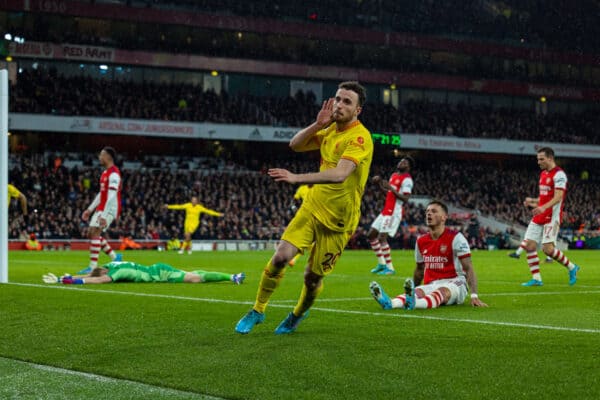 If Henderson was poor in the first half, Jota had a nightmare. Everything bounced off him, his passing was dreadful and he constantly checked back to play back into midfield instead of leading the attack.

Then he scored! Ruthlessly subbed off anyway after a fantastic near-post hit.

Playing with only one forward in the first half definitely hampered Liverpool but at least Diaz turned up to the party.

Not much came off for him as he had little support, but the work rate was impeccable. 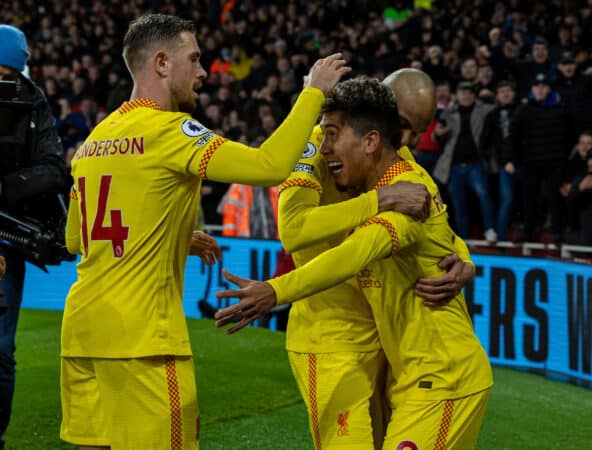 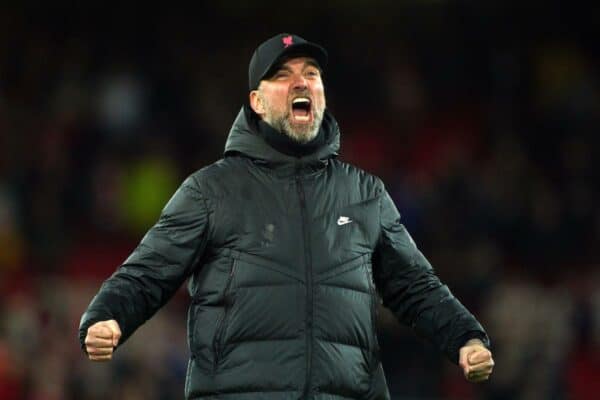 Might have got one or two things wrong pre-game, whether it was the midfield selection (which we could only really know in hindsight), the team-talk or whatever else.

But there can’t be much doubt that half-time saw Angry Norbert make an appearance; he was fuming all first half and the team came out three minutes early before the restart.

He was quick to turn to his bench and didn’t hesitate or change his mind even when the opening goal then went in, and they proved exactly what was required to further swing the momentum.

Our boss is one of the best at it.