MANILA, Philippines – Vice President Leni Robredo will not allow the massive, volunteer-led movement she inspired in the 2022 presidential elections to just fade away following her loss to the late dictator’s son Ferdinand “Bongbong” Marcos Jr.

Facing tens of thousands of her supporters during her thanksgiving event at the Ateneo de Manila University Quezon City on Friday, May 13, Robredo announced the creation of the Angat Buhay nongovernmental organization, harnessing the so-called “pink revolution” her campaign inspired for the bigger battle ahead.

This NGO, set to be launched on July 1 or a day after Robredo steps down as vice president, will be named after the highly praised anti-poverty and pandemic response program she has been running these past six years.

(The spirit of our campaign should never die out. The primary aim of an honest government is to uplift the lives of all. That’s why we are announcing our target: On the first day of July, we will launch the Angat Buhay NGO.)

The Vice President plans to tap into the Robredo People’s Councils that her campaign team had strategically put up across provinces to help organize the hundreds of volunteer groups that were created for her presidential bid.

Robredo may have lost the 2022 presidential race to her bitter rival Marcos, but she assured her supporters that all hope is not lost.

(We are going to build the largest volunteer network in the history of our country. We will continue going to those on the fringes of society and working together to alleviate their lives.)

And once the Angat Buhay NGO has been set up, it would serve all Filipinos in need, she stressed.

(But we will not choose who to help…. We will show them the full force of radical love.) 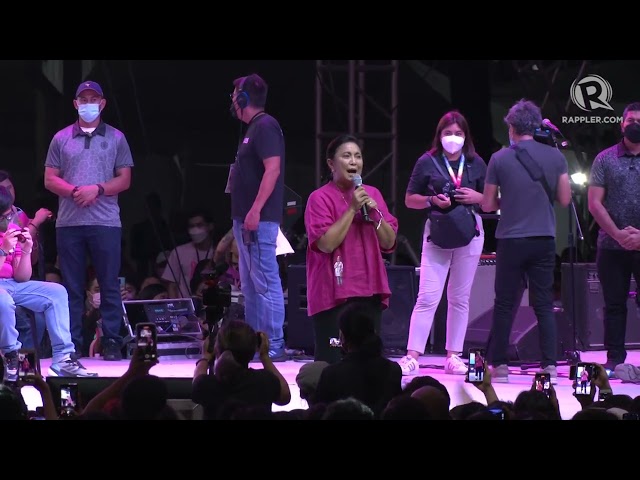 One of Robredo’s first campaign messages was a call for “radical love” – for her supporters to exercise sobriety and openness as they aim to convert those who were dead set on voting for another presidential contender.

It was only around mid-January of 2022 – about two weeks before the official campaign period started – that Robredo’s campaign slogan “Gobyernong Tapat, Angat Buhay Lahat (Honest Government, a Better Life for All)” was coined.

It was a heartbreaking loss for the lone female presidential contender, who was a riding on a volunteer-spurred momentum in the crucial homestretch of the 90-day campaign. It made her critics step up their attacks, with three of her male rivals even ganging up on her in a now-infamous joint press conference on Easer Sunday.

Robredo’s presidential bid has sparked what has since been called a “pink revolution” never before seen in Philippine elections, where even Filipinos who do not usually engage in political activities saw themselves spending their own money and dedicating time just to campaign for her.

She hit the ground running when the official campaign period started. Robredo was indefatigable on the campaign trail, visiting multiple provinces in a span of a week. She would start her day early in the morning and her grand rallies could last until midnight.

This was complemented by the massive volunteer base that Robredo attracted in the 2022 campaign. Her “kakapink” supporters organized soup kitchens, marches, motorcades, concerts, house-to-house campaigns, and grand rallies that were attended by tens of thousands – sometimes even in hundreds of thousands – across provinces.

Observers and Robredo herself likened the pink movement to the collective effort of Filipinos in February 1986 to oust Marcos Jr.s’ father and namesake, the dictator Ferdinand Marcos, through a bloodless revolution.

But all of these were not enough to make Robredo the 17th president of the Philippines. It expectedly upset her supporters, many of whom continued to grieve and grapple with the election results.

But Robredo already told them to accept the results. She then said that they should channel all their emotions into doing the necessary work needed to bring about a more meaningful change in the Philippines in the next six years. Sociologist Jayeel Cornelio said Robredo’s post-elections call for her movement aims to counter what some political pundits believe to be a creeping authoritarianism under Marcos.

Leni gets it. A disengaged citizenry will only embolden authoritarianism. Transforming the movement into the largest volunteer network this country has ever seen is not only a social intervention. It is a political statement,” Cornelio tweeted.

Robredo also made it clear on Friday that she would lead efforts to break the massive disinformation network on social media, rallying her “kakampinks” to join her in this crusade.

(I know you still have a lot of strength left. We can see that tonight. I will channel my energy to fighting lies and I am asking you to join me in this fight. We need to become a movement that would defend the truth. )

Without directly mentioning any name, the Vice President acknowledged that the Marcoses had spent years fortifying their disinformation network that sought to sanitize the Marcos regime and rid Filipinos’ memories of the atrocities committed during the Marcos dictatorship.

Studies have also showed that Robredo was the top target of these lies, which in turn benefitted Marcos’ presidential run.

Robredo believes she would need the help of the over 14 million “kakapinks” who voted for her in the May polls to counter the well-entrenched disinformation network.

(Our biggest…enemy was already dominant even before the campaign period because decades had spent working on this. The machinery capable of spreading hate and lies is formidable. It stole the truth, so it also stole our history and our future.)

(Disinformation is one of our biggest enemies. For now, perhaps the machinery of lies rules. But it is up to us how long it would prevail. It is up to us to say the fight is over or if it is only just beginning. )

The biggest challenge Robredo faced in this election were the lies peddled online by the Marcoses. As opposition leader to outgoing President Rodrigo Duterte, Robredo was also the primary target of trolls and government propagandists.

She is the one of the most vilified figures from the opposition, with a significant chunk of the Filipino electorate made to believe that she has done nothing but criticize Duterte. This, despite Robredo running highly effective anti-poverty and pandemic response programs that were praised even by politicians and groups allied with the administration.

Robredo’s Achilles heel is not that she was attacked, but that she did not act early enough to counter the lies being peddled against her online. Early on, she had shrugged off the false claims and refused to dignify them, saying she believed the truth would prevail, but midway in 2018, she decided to do something about it. Still, it wasn’t enough.

A part of Robredo blamed herself over just how high Marcos Jr. polled in voter preference surveys. He was the frontrunner through and through, dominating major pre-election surveys for the entirety of the official campaign period.

Thirty-six years after Filipinos ousted a dictator, they have elected his son as their next leader. Marcos Jr. ran a disciplined, well-oiled campaign, where he managed to evade scrutiny as he repeatedly harped on his message of unity in the absence of a detailed platform.

Robredo has learned a painful lesson in the 2022 elections, and with her declarations on Friday, she is shown to her supporters that the fight indeed is far from over. – Rappler.com